This is SO not my fault. The ever-fabulous Keris Stainton mentioned she was tempted to try Show & Tell‘s 30 Day Drawing Challenge – and I am nothing if not suggestible.

I drew a lot as a teenager (still have v fond memories of my watercolour of Colin the Leopard Lily for my GCSE coursework, painted while listening to Ned’s Atomic Dustbin on cassette: good times), and I don’t really know why I stopped. I think at some point I decided words were ‘more my thing’, on account of my drawing being actually a bit rubbish.

Luckily, now I’m a grown up I don’t care about such finicky things, and will foist it on you anyway.  Do please join in at home, interwebular friends!

Now I’ve thought about it, probably I could’ve done something clever here with a collage which interpreted the inner workings of my mind through the use of colour and triangles and stuff. But instead I just picked up a pencil and tried to draw my face.

For the uninitiated, here is my face:

Yes, I am in my dressing gown on the internet, wearing an earring made out of chalk.  Shush.

(Also: yes, I know, the To Fringe Or Not To Fringe debate rattles on; no, I am not really that yellow, etc etc.  This is sort of vaguely my general face, anyway.)

The results were… varied.

My first effort started well then veered into ‘I look a lot more like a half-Taiwanese five-year-old than I thought’, so I did a lot of rubbing out and correcting and decided my lips were particularly in need of attention, and… 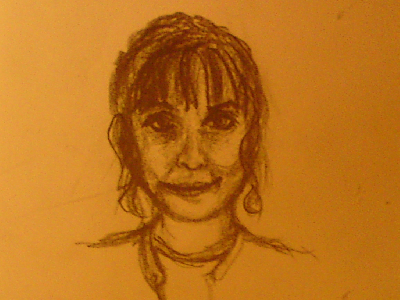 So I started over, and apparently decided to entirely ignore my face and draw Fiona Allen‘s face instead. 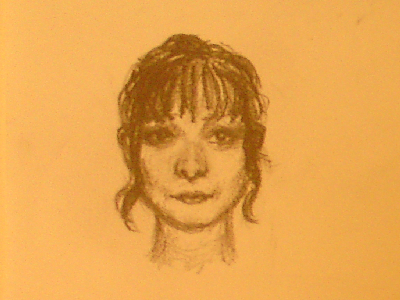 I blame the pencil. Pencils have a mind of their own.

Anyway, I started a 3rd time, and because I’ve put it last after those reprehensible efforts, it actually looks pretty good – even though in the real world it is an indeterminate set of features that, while it could plausibly be a person, still doesn’t in any way resemble me.  Hooray!

At least I have fully captured the way one holds one’s lips when deeply amused by one’s own epic crapulousness.

Come back tomorrow, when I will have to draw AN ANIMAL (presumably from memory, unless I can procure a giraffe this afternoon). You know you want to!

In the meantime, do make sure to visit the utterly lovely new blog Girls ♥ Books, because today’s post is by me and is even more dorky than this one. *takes a bow*

This site uses Akismet to reduce spam. Learn how your comment data is processed.